Finally, the wait is over for golf fans. The date is set and the players have confirmed their participation. The challenging Shinnecock Hills Golf course is ready to host all the big names in golf ranging from the legend Tiger Woods to recent champions such as Rory Macllroy and Dustin Jonson. While it is true that no one can tell straight away who will win this year’s tournament, all we can do is preview and predict the most likely outcomes. In this article, we take you through the 2018 U.S open golf preview and predictions. 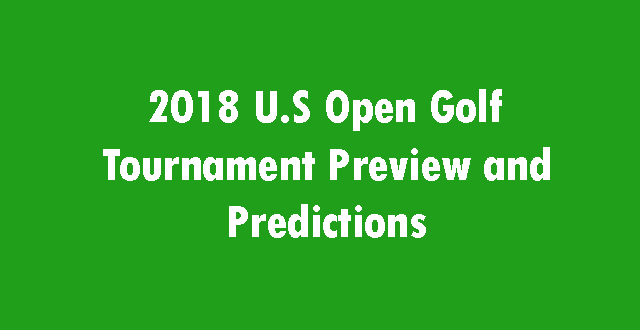 As aforementioned, the wait is finally over as the 2018 U.S Open is finally here. Many golf competitions take place throughout the year in most parts of the world. However, none comes close to the U.S Open golf tournament. The tournament is not only famous because of the huge prizes involved but also because of the bragging rights at stake. Every top golfer is keen on winning the tournament.

Some of the top players that have already confirmed their participation include Dustin Johnson, Rory Mcllroy, Jordan Spieth, Jason Day, Justin Thomas, Justin Rose, Tiger Woods, Jon Rahm and Brooks Koepka. All these players will be hoping to display their A games and hope that they are good enough to beat their competitors and clinch the title.

Basing on different factors such as current form, ability to play on different grounds, what the bookies say and experience, we have come up with a list of our predictions below:

It may come as a surprise to many but Dustin Johnson is one to watch in the 2018 U.S open golf tournament. After putting on a stunning performance recently at St. Jude Classic, Dustin Johnson once more indicated that he is a force to reckon. Jonson clinched the title on Sunday with a final score of 19-under and 6 shots ahead of his closest competitor. This result took him to the number one position; therefore, he will try to defend his place at Shinnecock hills when the time comes.
Dustin Johnson’s formidable form will help him move quicker when it comes to the longer pars in a yard that stretches to up to about 7,500 yards. All that he needs to do is keep his nerves when he approaches the greens and the title will be his.

Anybody who knows his golf well knows that Rory McIlroy has a very good chance of winning this year’s competition. Even though he recently won the Arnold Palmer Invitational, many golf lovers still think that he has the habit of coming in second when it really matters. However, we think that with his experience, he has the ability to win it all this time round. If anything, Rory won the competition in 2011 for the first time and continued to do so even when the odds were not on his side.

Even the bookies do not think that Tiger Woods has a shot in this year’s tournament. In fact, most of them are giving him a 20-1 chance of winning the competition. However, looking at Woods closely and assuming all other factors remain constant, you will notice that he still has a chance of regaining his once dazzling form. Look at it this way, yes; Tiger Woods won his last U.S open tournament in 2008. However, we should not forget that he is a 14- time major champion. The last time he was in Shinnecock Hills was in 2004 where he finished in a lowly 17th place. He would be looking to have a better record on the ground more than a decade later.

Let us also not forget that Tiger Woods knows how to perform in the big stage. Until today, it is his 15- stroke win in 2000 at Pebble Beach that goes down as the largest margin victory in U.S open history. This will most definitely give his competitors a run for their money.

Brooks Koepka is the current U.S Open defending champion. However, many things do not currently run in his favor, especially his visits to the Shinnecock Hills. For instance, in the 3 of his five starts there, he has finished in position 30 or below. Moreover, he has struggled in recent competitions such as Jude Classic and Wells Fargo (he finished at position 42 by the way). On the other hand, we cannot totally rule out Brooks from the competition. The fact that he won it once shows that he is capable of bouncing back from all his mysteries and clinching the title once again.

Rickie Fowler has been a constant contender in all of the last four competitions without getting over the line. Many times he has come so close! However, will he be able to get over the line this time? Will he clinch the 2018 U.S open golf tournament title? We think he has a reasonable chance of doing it. His best position in the competition is third, so he can go two positions up this year to win the title.

The 2018 U.S golf open promises to provide the golf fans with a bit of everything. There will be surprises, disappointments and joys. With all the talents that we have in the sport of golf today, it is very hard to tell straight away who will emerge as the winner of the U.S open tournament given that it has a lot at stake.

The 2018 U.S open golf tournament is already over. Starting this Thursday, golf fans from all over the world will head to the Shinnecock Hills where the event will be taking place. For those who will not make it to the venue, they will remain glued to their televisions and live stream sites just so they can catch up with the events live. As aforementioned, it is very hard to pick the winner at the moment given that a lot of stars will be participating in this year’s championships. From Rory McILroy to Tiger Woods and Rickie Fowler, the tournament will have a bit of everything.

For many fans around the world, it is not surprising anymore that Tiger Woods will be involved in the US Open. Based on the trusted source, Tiger Woods will get in his final competitive preparation for the US Open Golf 2018. This week, he played to prepare fo the US Open at Memorial Tournament. Tiger…

The world has been turning its attention towards Woods since he was involved in the horrific car crash. But it seems that Tiger Woods has successfully managed to overcome the injured leg. Four months after being involved in the car crash, he arrived in California as the US Open will honor him. Back in late…

If you are following the US Open Golf 2018, and want to make some fortune, you will surely want to focus on the good picks. The US Open 2018 is around the corner. This big event heads to Shinnecock Hills for the fifth time this June. In the US Open, it comes with mixed history….